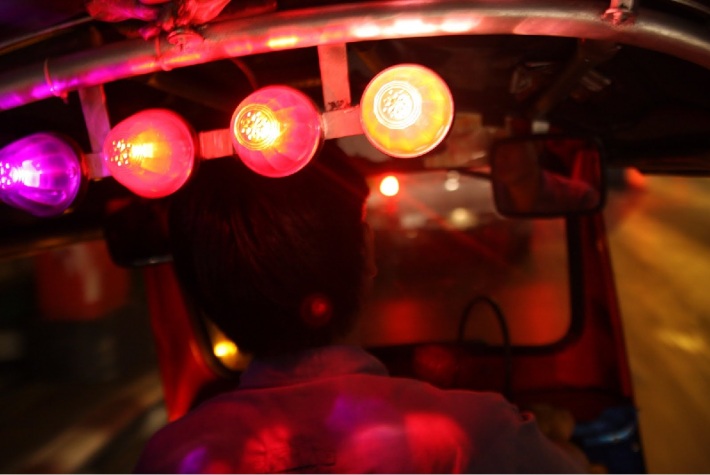 Travelling around South East Asia was not so much an onslaught on my senses, but a battle between them. Nowhere more so than in Phonm Pehn. Arriving at 2am on a rickety sleeper bus no sooner had I wiped the sleep from my eye was I thrust into the mêlée of tuk tuk drivers jostling to take the latest herd of travellers to their guesthouses.

Pulled along by the crowd I settled into the relative comfort of a Tuk Tuk, but as we were waiting to set off, a squabble broke out between my driver and another, disgruntled at having apparently lost his place in the pecking order, and I was promptly packed off into the challenger’s Tuk Tuk. Too tired to protest I acquiesced, but a niggling feeling in my stomach warned me this was not the best course of action.

After an average journey time to my guesthouse there seemed to be some confusion and it became apparent the driver didn’t believe we were at the correct guesthouse. I tried to reassure him but this was a man on a mission, and off we set for a further search of the empty streets. In time we arrived back at the same guesthouse and the driver engaged the night-watchman in conversation, trying to ascertain if it was indeed the correct establishment for my booking. At this point I attempted to join the conversation as it seemed to be the right place to me. Neither man spoke more than a smattering of English, and me only the most rudimentary Cambodian. I understood the guard believed there was ‘no room at the inn’, but I had a booking confirmation and protested until he at last relented and called another member of staff to clarify matters.

Fortunately the young chap who appeared spoke excellent English and had been expecting me, so wasting no more time I paid the driver.  I was still in conversation with the young fellow, who was explaining he needed to put me in a different room for the night, when I turned to see the driver speed off into the distance…with my backpack in tow! Panicked, I ran into the street after him, shouting and waving for him to stop, but to no avail, and I could only watch as the Tuk Tuk grew ever smaller until it faded into the night.

I thought it should be a fairly easy case of calling the taxi rank manager to explain the situation, and wait for the driver to return, but it transpired there were multiple bus drops in the city, and I didn’t know which road I arrived into. Nightmare! I grew ever more fraught while the hotel staff kindly rang around to find out which street I had arrived into, and advised me to enlist a Moto taxi to give chase and see if we could locate the Tuk Tuk driver ourselves. So that’s exactly what happened, my very own high-speed chase. Just like in the movies. Of course there was a language barrier and my lack of geographical knowledge to contend with. I remember thinking how hopeless the situation was and I should accept that my backpack was lost forever. In the back of my mind was the thought that this would one day be a great travel tale, and that calmed me, well, a little.

After what felt like hours the Moto taxi driver received a call saying the Tuk Tuk driver had been located and we would rendezvous in ten minutes. I was both relieved and anxious, as it had begun to feel a little cloak and dagger and paranoia had kicked in. However, the original driver did indeed arrive and handed over the backpack, albeit reluctantly. I don’t know whether he had received a rollocking from his boss, or the whole debacle had been deliberate, but when I refused to pay him for coming out to meet us he became very angry and delivered some choice words (well, I assume so anyway). The exhilaration was wearing off so I begrudgingly stuffed a bill into his hand and we sped off back to my guesthouse.

This story is now indeed one of my favourite travel tales to tell, and I cherish it as much as any. I will say this though, dear, reader. Always heed your instincts!